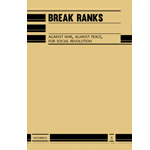 “Perhaps the world has never been in such great need of the vivifying breath of anarchism; never has the breaking of rules, discipline and the law seemed more necessary.” These words were written by a comrade on the brink of the second world war. Today war – the other side of the bloody face of the market, of
progress and production – continues to devastate the world which could be in the same need of the strident scream of anarchy against all power, breaking the ranks of both totalitarian and democratic states, scanning the horizon to stop the massacre at the source of its production.
Analyses of war, control, repression, exploitation, the militarization
of minds, sectarian hatred and technological mailstrom as aspects of this domination in constant restructuring come together in this
pamphlet, which ventures along the roads of action -yesterday as today – against their war… and against their peace.