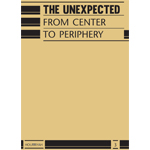 Looking elsewhere and otherwise. To think about how to throw the game of the opponent into disorder, instead of playing a hand. Of how to confound him, rather than to counter strike. Of how to surprise him, possibly, being where he doesn’t expect us, doing what he does not expect us to do. Trying to understand not what has always been done, but rather how to do what has never been done. To await situations at the cliff to make them precipitate, rather than chasing after them to possibly influence them with the weight of our (inhibited) presence. Or yet to intervene by treading through the periphery of a given situation without paralyzing ourselves in the central choke. Or even still, to anticipate these situations in order to divert them elsewhere, shattering the plans of the enemy.